Neither snow nor rain nor icy slush kept my hardy mailman from delivering a much anticipated package yesterday – my seeds! During the winteriest weeks of February, I’ve been happily planning out my garden for the spring. Although I had planned to keep things simple this year and concentrate on growing tried and true vegetables and flowers, I ended up getting a little carried away picking out flower seeds.

I got most of my flower seeds from Botanical Interests and my vegetable seeds from Pinetree Garden Seeds. I also splurged a little and ordered some fabulous looking dahlia bulbs from Eden Brothers. I’ve been starting my dahlias from seed, but I can only find the more gaudy, showy flowers as bulbs and with a name like “Bora Bora”, how could I resist.

All this planning for Spring and warmth and flowers had me inspired. I went back to a photo I took of my seedlings a couple of years ago that I’ve always loved and have wanted to work into a design.

This design has turned out to be one of my favorites. The touches of green and celadon hint at the promise of spring among the brown tones and blue highlights. It has a fun but sophisticated look.

The groundhog has predicted six more weeks of winter and this would be the perfect print to liven up my tired winter wardrobe. A fresh print on anything but wool would be fabulous right now.

It’s a good thing I’m training for a half-marathon (DC Half, April 27th) because I’ve just discovered no-knead bread. I know I’m a little late to the party, the New York Times published a recipe in 2006 and it seemed like every blogger/baker was making and raving about it. Because I was bread-baking shy from a disastrous experience that resulted in a very large floury hockey puck, I ignored the uproar. But recently, a friend mentioned that she had made the bread using The Baker Chick’s recipe and that it was fabulous. I guess enough time has passed from my bread debacle, that I was inspired. On Friday night, when we arrived at the cottage at 10:30, I stirred up the flour, water, salt and yeast, covered it with plastic wrap and went to bed. 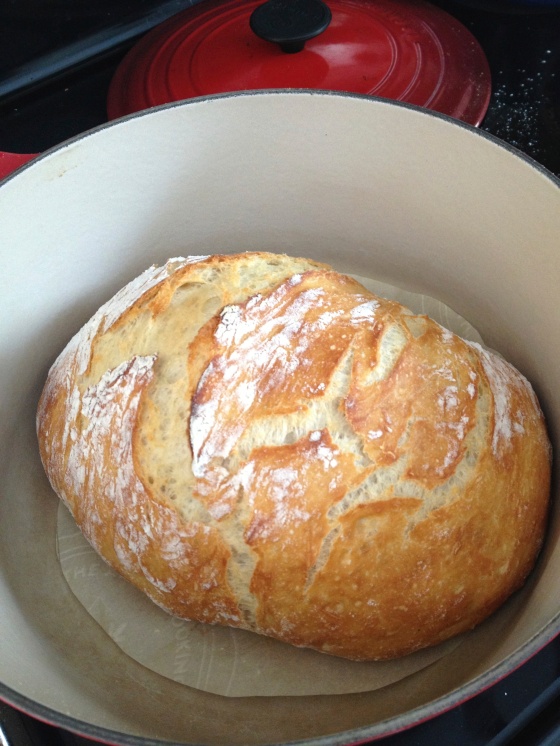 About 2 hours after I woke up the next morning I had a beautiful loaf of very tasty crusty bread. Ridiculously easy. Ridiculous. I almost felt like I was cheating somehow.

It took me five, maybe ten minutes to mix the dough in the evening – you don’t even need bread flour, just plain old all-purpose. The yeast did its magic overnight, I let it sit for about a half hour in the morning, and it baked for about 45 minutes. That was it. Ridiculous.

I know the world probably doesn’t need another blog about No-Knead bread, but I promise you, nothing lightens the gloom of this February’s wintery blast like the smell of fresh baked bread.