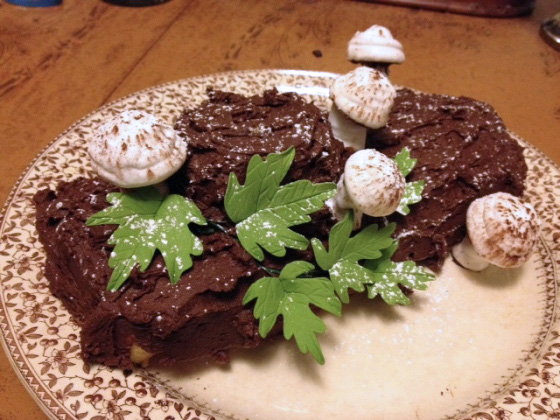 I’m kind of old school when it comes to my yearly bûche de Noël, I follow Julia Child’s recipe from “The Way to Cook”. The recipe is a little fussy, but it’s worth it. The cake is an orange almond spongecake baked on a flat sheet so that you can roll it up, and it’s filled with and frosted with a chocolate frosting that involves mixing melted chocolate into an Italian meringue and then adding whipped cream. Not for the faint of heart. Her recipe also includes making a nut brittle and crushing it to include in the frosting, I leave that out along with the spun sugar she decorates the finished log with. I have a limit of carmelizing only once per recipe, hanging over a pan gently swirling the sugar water in deadly fear that it will crystalize is too nerve racking for me to do multiple times for one cake. Also, I usually end up making it at my parents’ house in Connecticut, which is challenging in itself.

I actually did the same thing this year that I do every year that I’ve been making the bûche de Noël, the difference this Christmas was almost purely aesthetic. I finally made the meringue mushrooms that traditionally decorate a yule log. Every year I plan on making them, but I either run out of time or interest. This year, after I made the Italian meringue – which turned out perfectly, I may have brought family members over to the Kitchenaid to admire it – I still had another hour that the oven was free and I was still feeling pretty energetic. So, I pulled out my pastry bag and went to work. Fortunately, when I was still at home I  had looked up the recipe for meringue mushrooms in my copy of Maida Heatter’s Book of Great Desserts for tips on how to pipe out the meringue fungi. Unfortunately, I didn’t have the right pastry tip, so I just used the bag without a tip, which worked well for mushrooms that are supposed to look like they’ve just been plucked from a woodland scene. I also sprinkled a little cocoa on them to give them a more woodsy look. Once they had baked, I then used a little frosting to stick the stems to the tops and spread it a bit on the bottom of the cap to replicate the gills. I then tucked the squat little guys around the sugar leaves I picked up at the last minute at N.Y. Cake and Baking Distributor on 22nd Street. Sprinkled a little powdered sugar over it, and… Voila!

Not only does it look great and festive, but it’s also a really tasty combination of flavors, the orange almond cake complements the chocolate really well. 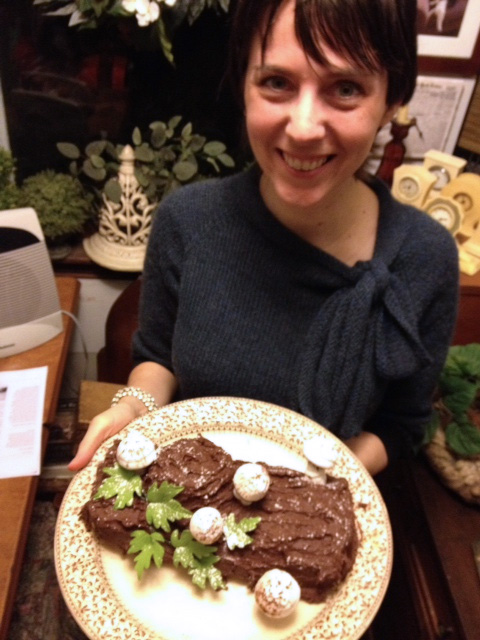 Have a wonderful new year!!